Frostbite is when the skin and tissues beneath it begin to freeze due to extreme cold exposure. When you are exposed to such extreme cold, there are a myriad of possible frostbite symptoms and problems that you can experience. These include hypothermia, trench foot, chilblains, frostbite and in the early stages of frostbite, frostnip.

Frostbite occurs when the temperature of blood becomes dangerously low. This slows blood flow and causes tissue cell death from the lack of oxygen. You will likely experience frostbite first in your extremities (toes and fingers). As the body’s natural reaction to extreme cold is to redirect blood flow to the vital organs, it leaves the extremities without warm, circulated blood.

Once your body is exposed to temperatures cold enough to freeze water (32 degrees Fahrenheit or 0 degrees Celsius), you are susceptible to frostnip after a few seconds of exposure. If you are wet the condition will worsen at a quicker pace.

As the body attempts to warm its core, circulation to the extremities decreases and the blood vessels narrow, blood clots may occur. When the tissues and fluids are chilled like this, the soft tissue can die and gangrene may occur. Severe cases of gangrene can lead to necessary amputation. The frostbite itself can cause severe and long lasting damage.

While any part of the body can be affected, frostbite usually presents on the hands, ears, feet, nose and lips.

What are the symptoms of frostbite?

Frostbites are categorized in degrees like burns, and like burns, the degrees are based on the skin level affected.

First degree frostbite, also known as frostnip, affects the surface level of the skin. As frostnip sets in, pain and itching will begin to develop.  Then as it progresses white or yellow patches will start popping up, and the area will start getting numb. While frostnip doesn’t often cause any kind of permanent damage, affected areas tend to be extra sensitive to heat and cold for a while until treated.

Second-degree frostbite occurs when the top layers of skin freeze and harden, while the deeper layers are still unaffected. Frostbite symptoms include purple-colored blisters will likely appear after a few days, and it is possible that those blisters can turn black and harden; it can take these lesions 3-4 weeks to heal. Nerve damage is possible at this degree. You can experience numbness and pain, or even total loss of sensation in the affected areas. Permanent damage is possible and you may not ever be able to properly sense heat or cold in those areas.

Third- and fourth-degree frostbite cases occur when the freezing penetrates deeper into the skin, causing deep tissue injury. Your muscles, blood vessels, tendons and nerves will freeze at this stage, and the skin will feel waxy and smooth. Permanent limb loss is quite possible.

Gangrene is an extreme complication of frostbite, and it is often necessary to treat gangrene by amputating the affected areas. Untreated gangrene leads to different diseases within the body that may be fatal.

Frostbite can cause a lot issues for your body. Small blood clots (called disseminated intravascular coagulation ) can form in your blood vessels, and cardiovascular collapse and sepsis is also possible. These can all be fatal if left untreated.

What is the treatment for frostbite?

Once you suspect frostbite, the best thing to do is to move to a warm place. Remove all wet clothes immediately and get into dry ones. Wrap the afflicted in heavy blankets and keep the frostbitten areas covered. 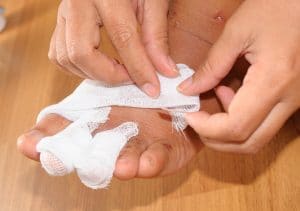 When warming the afflicted areas, be sure to do it slowly, as quickly warming the area can ineffectively dethaw the ice and lead to further complications. Putting the affected parts in warm water if possible to soak can help, and you should do that until normal color comes back (the color may come back and turn red as the skin swells up when blood circulation returns). Once that happens you can remove the afflicted areas from the water.

As mentioned before, quickly warming up the area can lead to more complications so you should avoid direct heat. Additionally, since the area will likely be numb, the afflicted person may not be able to sense frostbite symptoms like when their extremities are getting too warm and may end up burning themselves.

After removing the areas from warm water, they should be dried gently. A sterile dressing can be put loosely over them to protect them. If there is any infection in the skin or blisters, the doctor may prescribe an antibiotic.

Once removed, you should gently dry the area and put a loose, sterile dressing over them. The afflicted should consult with a doctor to make sure that the area is healing properly. It is common for infections to develop in frostbitten areas so this is an important step in recovery.

If you work or play outside, come in for preventive tips. If you already have experienced damage due to cold, we can help.