Methicillin-Resistant Staph Aureus, more commonly known as MRSA. These organisms have developed as a direct result of the over-use of antibiotics, particularly in North America. They can currently be found in an increasing number of hospitals worldwide, and pose a great risk to any patient they contact. Only the strongest intravenous antibiotics, usually vancomycin, can be used to treat MRSA.

The development of antibiotics is one of the most revolutionary advances in the history of medicine. Doctors soon had safe, effective, and inexpensive treatments for bacterial infections ranging from strep throat to systemic blood sepsis. In a very short period of time the number of deaths from hospital-related infections began to fall dramatically.

These life-saving and seemingly miraculous drugs had unintended consequences, however. Penicillin was first discovered in 1928, and it became widely available in the mid-1950’s. The now world-famous medication began to be used in hospitals across the globe on an industrial scale almost immediately.

All bacteria are microscopic, single-celled organisms which reproduce very rapidly. Researchers have long known that this trait assists bacteria in adapting to changes in their environment. It was theorized early on that these hardy organisms could develop a resistance to this new antibiotic. Several experts saw this event as inevitable, in fact, and urged cautious use of the new drug.

By the late 1950’s the first cases of penicillin-resistant bacterial infections started to pop up in hospitals in Europe. Cases began to appear in North America soon afterwards. The bacteria in question were “staphylococcus” organisms, the Latin term for “rod-shaped.” Methicillin, a stronger antibiotic, remained effective however, and was used in penicillin’s place.

In the years that followed, the species Staphylococcus Aureus began to display a resistance to methicillin. This organism is now commonly known by its acronym, MRSA, which stands for Methicillin-Resistant Staph Aureus. It’s now one of several strains to display high levels of antibiotic resistance, a relatively new and troubling development.

The prevention of MRSA and other antibiotic-resistant staph infections.

Methicillin-Resistant Staph Aureus is better known by its world-famous acronym, MRSA. This exceptionally hardy strain of antibiotic-resistant bacteria had previously been confined to hospitals. In many of these cases the patient had a weakened immune system. This can be due to autoimmune diseases, certain prescription medications such as steroids, or extreme old age.

Yet several recent outbreaks have gone against this pattern. These occurred outside of the inpatient hospital environment, and involved college-age athletes in otherwise very good health. All were the result of a single infected athlete with a weeping or draining wound contacting uninfected teammates. Indirect contact, such as sharing clothing or towels, was most likely a major contributing factor.

The warm, moist locker room environment can potentially spread several infectious organisms, including varieties of Staph Aureus. Plastic sandals or other waterproof shower-shoes should be worn at all times to prevent contact with the floor. This can also help prevent the spread of fungal infections such as athlete’s foot.

It is thought that simple, immediate first aid of the initial wound could have prevented these outbreaks entirely. Any cut or break in the skin should be cleaned thoroughly with warm water and mild soap. An over-the-counter triple antibiotic ointment should then be applied, and the wound covered in sterile dressing. If exposure is expected, a diluted bleach bath may be helpful. 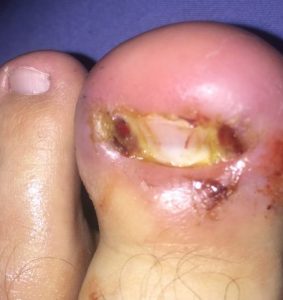 Most small scrapes and wounds will heal on their own, and do not require further treatment. The signs and symptoms of infections, such as swelling, redness, warmth, and pain, will begin within hours if present. The formation of reddish lines leading away from the wound can signal that the infection is spreading. If infection is suspected, seek professional medical attention immediately as treatment with antibiotics may be necessary.

The development of antibiotics remains one of Medical Science’s greatest achievements. These powerful medications kill disease causing bacteria, and are directly responsible for saving millions of lives each year. Illnesses and infections which were once lethal are now easily curable thanks to these medications. They are truly “wonder drugs,” occupying a place in history besides anesthetics, insulin, and immunizations to diseases like polio.

These drugs are incredibly useful if not absolutely essential. Yet they aren’t a perfect solution to the problems of infectious disease, and must be used wisely. Bacteria are a type of micro-organism or “germ,” and although they’re tiny they are living creatures. They can develop a resistance or even immunity to pharmaceutical drugs over time, just like any other living thing. This includes antibiotics, the medications designed to destroy them.

Antibiotics will also do nothing for diseases or conditions caused by a virus, fungus, or parasite. They can destroy the beneficial bacteria which live in your gut, however. This negatively affects your health in several ways, including weakening your immune system. This is why it’s common for patients to “not feel right” until this bacterial population regenerates, which takes weeks.

There is also no single antibiotic which is effective against all bacteria, further complicating the issue. Yet the fact that bacteria can become resistant to these drugs remains their most critical weakness. The development of antibiotic-resistant bacteria is a cautionary tale about the incredible risks of using these powerful medications incorrectly.

Many people have heard the term “MRSA,” which is pronounced something like “Mur—Sah.” It’s an abbreviation for “Methicillin-Resistant Staphylococcus (Staph) Aureus,” the scientific name for a species of rod-shaped bacteria. The term Staphylococcus means “rod-shaped” in Latin. Aureus means “gold,” which refers to the yellow pigment these bacteria sometimes produce.