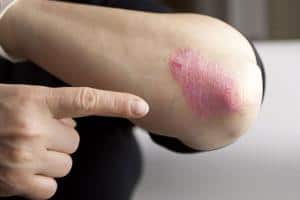 Psoriasis, which is considered to be an autoimmune disease, is a chronic skin disorder. What this means is that instead of protecting your body, your immune system attacks the body. In the United States, over 6.7 million people are affected by psoriasis.

This condition causes your skin to develop painful, itchy patches of skin that appear to be scaly, and even red or silvery. These patches sometimes disappear and reappear over time, whether it be a couple days or a month.

Psoriasis symptoms and how to spot them.

Other symptoms of psoriasis are low self-esteem, anxiety, and mental stress. Also, depression is very common for people living with psoriasis. Symptoms, however, vary based of the kind of psoriasis someone is diagnosed with. Officially, these are the five kinds of psoriasis:

The size of these patches are anywhere from 1-10 cm in width, though they can sometimes be bigger and cover larger parts of the body. When the patches become irritated by scratching symptoms will worsen.

First, a doctor will most likely suggest using moisturizers to prevent the skin from becoming dry and irritated. Types of moisturizers to use are over-the-counter cortisone creams or moisturizers with an ointment base. You and your doctor can even work to find triggers that spike your psoriasis, such as sleep loss or stress.

Other treatment options include:

Some cases of plaque psoriasis may even require light therapy. This type of treatment requires skin to be exposed to UVA and UVB rays. Some treatment options can include combining light therapy, oral medications, and ointments prescribed to help reduce the inflammation.

Pustular psoriasis can sometimes infect more isolated parts, such as hands or feet. Adversely, it could also affect larger skin portions and cover most surfaces. Pustules also are known to combine with one another, this is where scaling can occur.

Some may experience remissive and recurring periods of pustule occurrences. While pus from this form of psoriasis is not infectious, flu-like symptoms can arise, such as:

There are also three subcategories of pustular psoriasis

These types of pustular psoriasis come with their own, different sets of symptoms and varying severity.

The size of areas affected by pustular psoriasis affect the kind of treatments required. Patches that are smaller can be treated by over-the-counter or prescription corticosteroid creams, while large areas affected may need light therapy or oral medication. Establishing any underlying causes for pustular psoriasis can also be a major factor into reducing any recurrences.

A serious condition, Psoriatic Arthritis, is arduous and limiting to the body, and affects over one-third of people living with psoriasis. Five different types of psoriatic arthritis exist, each containing their own set of symptoms. Unfortunately, there is not a cure for this kind of psoriasis.

Psoriasis is an autoimmune disease which triggers the body, making it attack the skin and joints. This kind of psoriasis typically affects the hands very seriously and inflicts multiple joints. Commonly, symptoms appear on the skin before they do on the joints.

Other options that help reduce the inflammation one may experience are by being prescribed medication, including prednisone which is an oral corticosteroid. Topical medications to also be prescribed are salicylic acid, tazarotene, or calciopotriene. Another option may even be light therapy to reduce the symptoms of psoriatic arthritis.

Lastly, an uncommon group of medication is left to be discussed. These include disease-modifying antirheumatic drugs, known as DMARDs, which are also used to ease joint damage and inflammation. There is a subcategory of DMARDs, referred to as biologics, that are also prescribed to work on a cellular level.

Guttate psoriasis presents as tiny, red spots on skin, and is the second most common type of psoriasis that affects approximately ten percent of people living with this condition. Typically, this type of psoriasis begins either in childhood or as a young adult.

The markings associated with guttate psoriasis are separated, small drop-like shapes. These spots typically show up on limbs and torso, but they may also affect the face and scalp. Generally, these spots aren’t as thick as those with plaque psoriasis, though over time they may develop and turn into plaque psoriasis.

Guttate psoriasis occurs after specific triggers, such as stress, a skin injury, strep throat, medication, or an infection.

The first step to treating guttate psoriasis is by treating the underlying condition a person is experiencing. Antibiotics may be used if the cause is from a bacterial infection. Your doctor may also feel it necessary to prescribe oral medications, steroid creams, or even light therapy.

This rare type of psoriasis, also known as exfoliative psoriasis, appears like a severe burn, and is so serious, it can even be seen as a medical emergency. Hospitalization may become necessary as areas affected by this psoriasis may make you unable to control your body’s temperature.

This type of psoriasis is red, scaly, and often widespread, covering large areas of the body. As opposed to the small scales that exfoliate with more common types of psoriasis, in erythrodermic psoriasis this occurs in large portions of the skin.

Someone living with this extreme psoriasis usually needs hospitalization. While in there, a combination of remedies most likely to be used until symptoms lessen are: prescription oral medications, topical steroid applicants, and medicated wet dressing.

If you believe you have erythrodermic psoriasis, please consult your doctor and make appointment, as this may be a serious medical emergency.

How to Treat common psoriasis:

Oral medications and light therapy may also be used depending on the success of other treatment options.

While there is not a cure for any type of psoriasis, healing and remission is possible. As you and your doctor work to devise a treatment plan for managing your psoriasis, there are also steps you can take to manage psoriasis at home.

Typically, physicians start off by using topical treatments or light therapy, only continuing on to systemic medication if the first options don’t help improve conditions. Over time, by trying all your options, you will be able to build up the most effective treatments for your symptoms.

Coping and Support for Psoriasis

Mental health issues, such as depression, stress, and anxiety can be possible side effects for a person living with psoriasis. Support groups or therapy may be beneficial as exposure to other people living with this condition can help relieve suffering. Asking your doctor about a therapist experienced with psoriasis may also be able to offer other ways to cope.

If you are concerned about your skin, remember there are many different kinds of psoriasis, each with their own set of symptoms. Talking to your doctor is crucial to determine a specific treatment plan for relieving discomfort, as no cure exists for psoriasis.

A lot of people mistakenly believe that psoriasis is contagious, but it is important to remember that psoriasis does not spread from contact. Researchers have come to believe there is a combination of factors that cause psoriasis, such as environment, genetics, and immune system.

With the help of many psoriasis organizations and activists, this chronic condition has been able to gain awareness and support. If you are experiences what you believe to be psoriasis, please contact your doctor for possible treatment options.