At Beaver Valley Foot Clinic we offer Laser wart removal which is a kid friendly alternative to painful scarier options. Laser treatment for warts is well tolerated by even very small children (and big babies!). Combined with special acid to treat warts, the treatment time is cut down considerable.

For those busy patients who don’t have time for multiple treatments we have the one and done option. This entails the light numbing and surgical removal of warts all in a few minutes.

Plantar warts, also known as Verruca Plantaris, are small growths on the foot that develop after the skin is infected by a virus. They are a common viral skin infection generally located on the bottom side of your foot, also known as verrucca planteris or plantar warts, for which they are named. Plantar warts occur most commonly in children, adolescents, and the elderly, and approximately seven to ten percent of the general population suffer from plantar warts or a similar condition.

When to see a doctor

The Swift® System: a revolutionary new approach to wart removal.

Warts, also known as verrucae, remain one of the most treatment-resistant conditions commonly seen by podiatrists. Treatments currently in use include uncomfortable cryotherapy and heat-based cautery. Both can cause unintentional damage to nearby healthy tissue, and in a substantial number of cases the warts return.

Topical acid solutions are another frequently encountered treatment option. These come in prescription and over the counter formulations. The stronger prescription topicals can be effective if used as directed, typically for weeks or months. Non-prescription varieties are almost completely ineffective.

Swift® Microwave Technology offers a welcome breakthrough which benefits both patients and physicians. It’s fast, efficient, and scalable to even the most high-volume practices. The Swift® System’s features and benefits include:

Consistency—the Microwave energy used to generate heat during a Swift® treatment can be controlled with extreme precision. Treatments never vary.

No dressings—the Microwave energy used during treatment does not break or otherwise damage the skin. Sterile dressings may be applied but are not necessary.

No anesthetics—treatments such as cryotherapy and cautery are intensely painful and require local anesthetics such as Lidocaine. In comparison, Swift® treatments are often described as mildly uncomfortable for a period of about 2 seconds. Normal activities can begin immediately after treatment.

No contraindications—the Microwave energy used during treatments is non-ionizing. This means that it’s completely safe for all patients.

Only minimal debridement—more invasive options sometimes require a high degree of lesion reduction prior to treatment. Only superficial debridement is needed to facilitate contact with the applicator head, and the Swift® generator does the rest. This not only enhances patient comfort but speeds treatment time as well.

Surgery and Other Procedures

If the self-care has not helped, we recommend the following treatments:

Some patients need repeat treatments to fully treat the wart as it may return.

What To Look For In A Wart Treatment

Since there is no cure for HPV, therapeutic options are only used to eliminate signs and symptoms of the wart. Therapies vary amongst patients, and often there is a combination of more than one therapy. Ideally, wart therapy is painless while preventing scarring and lesions. One to three office visits can offer HPV immunity in less severe treatments. Randomized controlled clinical trials are lacking, but lower extremity warts prove to be affected by therapies.

Plantar warts are a challenge for patients and clinicians due to a specific antiviral therapy not being developed. Treatment options include salicylic acid, bleomycin, cryotherapy, and surgical removal. These options differ in success rate and will be discussed with you during your doctor’s appointment.

Sharp debridement of the wart lesion is necessary to remove the hyperkeratotic covering to improve topical therapy penetration. Debridement is considered for most in-office therapies, but avoid debridement if using a non-ablative laser. The target for these devices is oxyhemoglobin, and if blood is on the surface the laser may be too superficial to have an effect on treatment.

A Quick Word About Folk Remedies

Folk remedies include rubbing fruits on the wart, performing rituals with vegetables, and rubbing toads on a wart. These may seem foolish, but most warts have a finite presence and these remedies may coincide with warts spontaneous resolution.

Mechanism of action is unclear but could be related to local irritation from the adhesive or occlusion caused by duct tape. In previous studies, it was difficult for patients with plantar warts to keep the tape on consistently due to hyperhidrosis and footwear. Duct tape may be a cheap therapy for those unwilling to seek medical treatment, but more research is needed on plantar verrucae.

The virus that causes plantar warts also needs to enter the foot through: 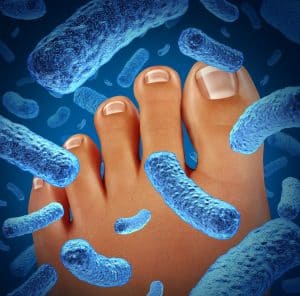 When preparing for your treatment…

bring a list of your current medications and dosage and any questions you may have, such as:

What is a wart?

Warts are small, roundish growths that can technically appear anywhere on the body. In practice, they most commonly appear on the feet and hands. These lesions are caused by the Human Papilloma Virus (HPV), which enters through small cracks in the skin. Note that some patient populations are more likely to develop warts. These include:

Although warts are harmless they can cause discomfort when subjected to repetitive pressure. This is particularly true of warts on the soles of the feet (plantar warts). Yet even lesions which cause no pain may be cosmetically displeasing to the patient.

Either way, many new wart-sufferers find themselves wondering how long their condition will last. Some warts do go away on their own, without treatment. Others may persist for years without intervention.

In general, two types of wart treatments exist today. The first are self-care products meant to be used at home. These Over-the-Counter (OTC) preparations are available at any pharmacy. The second includes prescription medications and minor in-office procedures.

In reality, most do-it-yourself wart preparations are ineffective. Typically, those that do work must be used for very long periods. In almost all cases it is best to seek wart treatment from a trained professional. This is especially true for patients with other comorbid conditions. In particular, it is vital that diabetic patients with plantar warts should let a podiatrist handle the situation.

There are over 100 strains of the HPV in circulation today which are capable of causing warts. Together, they are responsible for several different varieties:

What to Do Prior to Treatment

Patients can try to use alternative medications like over the counter products. However, please ask us before you try anything, especially if you have:

If pressure along the wart is still causing pain, patients should wear shoes with cushions (like tennis shoes that support the sole). Avoid wearing high heels, tight shoes and anything that is uncomfortable on the feet. 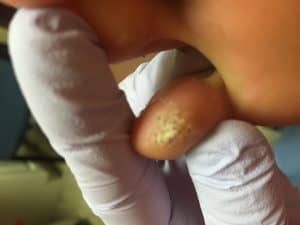 If you think you may have a plantar wart, call a Podiatry clinic for information and schedule an appointment today! 878-313-FEET (3338)

This patient presented for callus care in Moon Twp with a long history of pain while walking, even in shoes. The patient expected the Dr would shave it as others had done and it would continually return. However, if you look closely at the “callous”, there are small black dots under the callused over skin. In one visit we identified and removed the wart, which was deeply embedded under the skin. This went on to full healing and has not returned!

This can be considered the “normal” wart found on the skin of millions of people today. They range in size from about 1-10 millimeters, and have a rough, “cauliflower” like texture. These common warts typically occur on the backs of the fingers and toes. Other probable locations include around the knees or other joints, although they may appear anywhere.

These are found on the soles of the feet, often having a callus-like appearance. Several small, black dot are usually seen in the center. They may occur as isolated small lesions, in small clusters, or as single larger warts.

Plantar warts can cause considerable discomfort when put under pressure. Patients often feel they have a pebble in their shoe, and prolonged walking becomes increasingly painful. This is the primary reason that many patients with plantar warts seek wart-removal treatment.

This type of wart presents as a flat, skin-colored lesion on the face, legs, and hands. Most people with plane warts have multiple lesions. This makes sense, as they are spread by damage done to the skin during shaving.

This unusual type of wart looks like a frond or thread protruding from the skin. Unfortunately, they often occur on the face, centering on the mouth, nose, and eyes. Filiform warts can grow much faster than other types.

These typically appear on the hands, and look similar to the common wart. Multiple warts are almost always present. Butcher’s warts are caused by a specialized HPV strain that is transmissible in cold, moist environments. This is why butchers and dock-workers traditionally develop this variety.

The first important point is that treatment doesn’t actually cure the HPV infection. Instead, they work to physically get rid of the wart, either all at once or layer by layer. The virus responsible will always be present, nested deeper within the skin. This leads to the second important point. Even after a completely successful treatment it is always possible for warts to return. This fact accounts for the common wart’s reputation as an unusually stubborn condition.