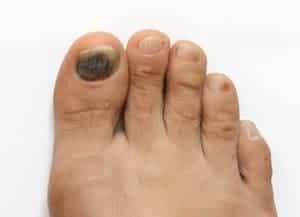 Runner’s toe, or subungual hematoma , is a repetitive injury to toes seen in runners.

Runner’s toe – This forms from repetitive pressure to the toenail, causing it to lift and as it rips the connective tissue holding the nail in place, the small blood vessels leak and bleed, filling the area under the toe with blood, giving it that reddish blue color.

A true subungal hematoma is much worse than a bruised toenail. The blood vessels are damaged to the point where the blood pools under the nail, causing it to lift up. This pressure building up in a closed compartment puts pressure on the many nerves under the toenail and can get extremely painful. If the pressure is not relieved , the toe can even become numb which is a sign of nerve damage. it is also a good culture medium for germs and can eventually lead to an infection. 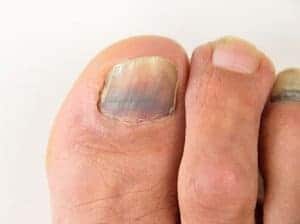 How long does it take for Runner’s toe to heal?

While the pain can often be relieved immediately by decreasing the pressure by draining the blood, it may continue to be sore for a couple days. However it may take as long as a year for the toenail to grow out and replace itsself .

Why do your toenails turn black?

At first the blood under the toenail may look red, but as it oxidizes and get old, it turns black.

How long does it take for a bruise under the toenail to heal? It usually has to grow out which takes 6-12 month

What is the black under my toenail? Usually it takes  a few months for a new toenail to start to come in under the old bruised nail. This may eventually push the old nail off. If it lifts up , you are at risk of catching it and ripping it.

Because it protrudes more than your other toes, your big toe is more likely to develop runner’s toe than any other toe. The first and second toes of soccer players frequently have runner’s toe. It’s typical to experience acute discomfort that makes being active difficult. This is typically brought on by pressure that has accumulated under your nail. Your toenail may even begin to lift off the nail bed as a result.

What are the most typical causes of runner’s toenail?

Runner’s toenail risk factors haven’t been particularly studied in study, although general running injury risk factors were covered in a review of papers published in 2015 by Trusted Source. Men were shown to be more prone than women to sustain running injuries, according to strong to moderate evidence.

The following potential risk factors for women were discovered by researchers to exist:

Signs That It’s Time To See A Doctor

What should you do if you bruise your toenail?

← #7 How to Treat Heel Pain? 10 Most Common Questions Asked of a Pittsburgh Podiatrist
Orthotics for Foot Comfort →