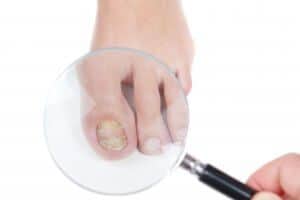 All such infections are caused by fungal organisms that thrives in the moist environment the feet offer. The most common is called dermatophyte fungus. Other common offenders are common yeast and even mold.

This can happen to patients at any age, but as with many other foot problems it’s most common in older adults. Nails become brittle with age, resulting in the formation of tiny cracks, which give fungus a way in. If a person is diabetic or has a weakened immune system due to some medications, then the chances of infection go up.

As noted, the same fungus which causes athlete’s foot also causes nail fungus. It’s entirely possible to have one progress to the other, as well as the infection spreading from nail to nail. Person to person transmission is much rarer.

The following is a list of the most commonly seen risk factors: 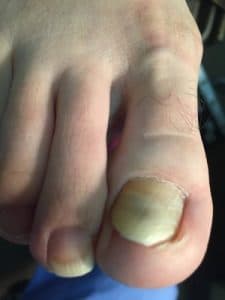 If a case of onychomycosis is severe enough, it can be quite painful, as the skin beneath the nails is very sensitive. The nail can become ingrown. Permanent damage is also possible in severe cases. Another obvious complication is the infection spreading to other nails (or even the other foot).

With diabetes often comes a decreased nerve supply leading to reduced sensation. Poor circulation is also common. This means that diabetic feet are more prone to any type of infection, including fungal. The lack of sensation also means that people often damage their foot without them feeling it, such as repetitive trauma from tight shoes. As with any other type of trauma, this can allow fungus a way in. It bears repeating: it’s essential for diabetics to be under a podiatrist’s care.

Good hygiene and foot care practices are the best way to prevent any type of infection, especially the fungal infections which cause onychomycosis.

This is done by physical examination. If there’s any doubt, clippings and debris scrapings can be sent in for identification. This will identify specifically which organism is causing the infection.

Some conditions, namely psoriasis, often look like onychomycosis. Once the true cause is known, the most appropriate treatment can be started.

While often referred to as “toenail fungus” or simply “nail fungus” the medical term for this type of fungal infection is onychomycosis. It’s extremely common, especially in wetter regions, and it’s also very difficult to get rid of. Only recently have truly effective treatments become available to podiatrists which can clear an infection completely and permanently.

Onychomycosis typically starts as whitish or yellowish spots beneath the nail at the tip of the nail bed. As the infection progresses the fungus can colonize large portions of the nail bed as well as the nail itself. Advanced cases can cause discomfort due to inflammation (and occasionally secondary infection) but the condition’s hallmark symptoms are cosmetic. These include further discoloration, thickening, and an uneven, often wavy texture. The nails tend to become brittle and crumble at the tip, and flaky debris can be found beneath the nail. Severe cases of onychomycosis are often accompanied by an unpleasant yeasty odor. This condition can affect one or several toes but is most often found beneath the toenail of the big (first) toe.