Of all the conditions podiatrists commonly see, toenail fungus (onychomycosis) is perhaps the most difficult to treat as self care toenail fungus. The condition itself is rarely dangerous but can be quite unsightly, especially in more severe cases. Common symptoms include thickened or brittle nails with a brownish or yellowish discoloration.

One of the most popular and widely used self care toenail fungus treatments is Vick’s Vapo-rub. It doesn’t compare to oral antifungal medications. Lamisil (terbinafine) and Diflucan (fluconazole) are among the most prescribed, and are more effective.

While they offer a good shot at a complete cure, these drugs aren’t perfect. Side effects range from nausea and rashes all the way to severe liver damage. As such, it’s not surprising that oral meds aren’t a good option for patients with pre-existing conditions such as cirrhosis.

In order to avoid these issues entirely a large number of patients try at-home, do-it-yourself treatments first. Here are 10 of the most popular.

Before we start, it’s important to acknowledge that these treatments aren’t a substitute for professional medical care. With this being said, however, they can’t hurt and when you use them properly, they may indeed help. 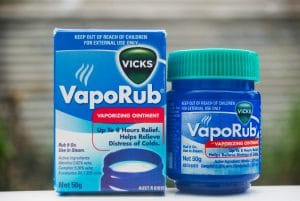 This topical ointment is readily available in any drug store or pharmacy. While intended as a cough suppressant, there’s some evidence of its effectiveness at treating fungal infections, including onychomycosis.

The active ingredients of Vicks include eucalyptus oil and camphor, both of which have antifungal properties. Data is limited, but a 2012 study found that Vicks Vapo-Rub “shows a positive clinical effect” in treating onychomycosis.

Using Vicks to treat toenail fungus is quick and easy. Simply apply a small amount to the affected nails, preferably after a shower or bath.

Snakeroot is a plant in the same family as the common sunflower. It contains several active ingredients which have proven antifungal properties. It is currently believed that snakeroot extract is at least as powerful as most topical antifungal creams.

A small scale study measuring the effectiveness of snakeroot extract was performed in 2009. It was found that the active ingredients found in snakeroot were as effective as the popular prescription topical Ciclopirox.

Snakeroot extract can be bought from many reputable online dealers. Treatment consists of 3 stages. During the first month the extract should be applied to the nails every 3 days. For the second month apply twice weekly. Finally, treatment during the third and final month should be limited to once a week.

Contrary to its name, the tea tree isn’t the same plant used to make the internationally popular steeped beverage. We also know it as the melaleuca tree. The plant is native to Australia and most closely resembles the eucalyptus tree. They use the essential oil of the tea tree over centuries for its many health benefits. Most notably, tea tree oil is a potent natural antiseptic and antifungal.

Several small-scale studies have explored the use of melaleuca oil for the treatment of onychomycosis. There’s a need for larger studies yet the results have been promising. Research done by the National Center for Integrative Medicine has indicated that it’s as effective as some non-prescription creams.

Using it is easy, and this all-natural product has none of the side effects of comparable OTC topicals. Using a Q-tip, simply apply to the entire nail twice a day. Make sure to (gently) apply beneath the nail as far back as possible.

Thymol is the active ingredient in oregano oil. It’s responsible for the herb’s unique taste and aroma and is another potent natural antifungal compound. A 2017 meta-analysis of the existing literature concluded that oregano oil achieves results similar to several OTC products.

Oregano oil, or more specifically the thymol it contains, can irritate the skin. To avoid potential irritation many holistic-minded individuals use equal parts oregano and tea tree oil. Oregano oil can be applied using a Q-tip in exactly the same fashion as melaleuca oil.

Unlike most essential oils, which you must apply topically, olive leaf extract works best when you take it orally. When you ingest the extract’s active ingredient, oleuropein, it serves as a natural, systemic antifungal .This produces zero side-effects. As an added bonus it’s thought to boost the immune system as well.

To use olive leaf extract as a dietary supplement take 3 capsules twice daily after meals. Be sure to take with a full 8 ounces of water. Note that you can apply the essential oil of olive leaves topically to the nails. It’s most useful to take the extract orally, however, the extract and oil you can certainly use together.

Using a high-pressure diffuser system it’s possible to dissolve the gas ozone into various vegetable oils. In practice the process is a lot like dissolving carbon dioxide in water to make carbonated water. The most commonly used oils are sunflower and olive.

Ozone is toxic to almost all forms of microorganisms, including bacteria, yeasts, molds, and fungi. Ozonized oils are quite potent, and should only be used for short periods of time to treat fungal toenails. When applied to the nails twice daily ozonized oils have a limited ability to penetrate into the nail. This is something most topical agents simply aren’t capable of doing.

In 2011 a side-by-side comparison was done between ozonized sunflower oil and the prescription antifungal cream Xolegel (ketoconazole). The study was quite small, yet the data indicated that sunflower oil was more effective than its prescription counterpart.

Throughout history the medicinal properties of vinegar have been used to treat a variety of ailments. While no studies or research support using vinegar as an antifungal some holistic practitioners swear by it. Using vinegar carries no risk of side effects. So while it may not help it won’t cause any harm.

Using vinegar as part of a hot soak appears to be most effective. To use, mix 2 parts hot water to 1 part vinegar. Soak the feet for approximately 20-30 minutes daily or as desired. Vinegar is harmless, so there’s no recommended maximum soaking time. 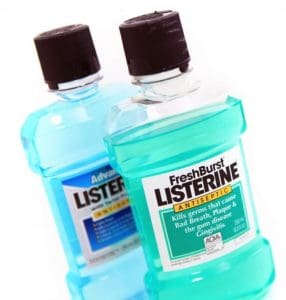 The antiseptic mouth rinse Listerine contains several essential oils with antifungal properties. These include menthol, eucalyptol, and thymol, the active ingredient in oregano oil. As such it’s not surprising that Listerine has found its place as a do-it-yourself cure for fungal toenails.

Listerine may be used by preparing a hot soak in exactly the same manner as vinegar. Also, much like vinegar, Listerine doesn’t cause any side-effects so it’s fine to soak as long as desired.

This universally popular herb has been used for medicinal purposes since before recorded history. Its proven benefits include improved circulation, lowered blood pressure, and improved metabolism, just to name a few. It also has well documented antifungal and antibacterial properties. This makes garlic an obvious choice for the self-treatment of toenail fungus.

To treat onychomycosis, apply crushed garlic to the entire affected nail once daily. Prepared garlic oil is also an effective option, not to mention that it’s much neater. It’s recommended that the garlic be left in place for approximately 30 minutes.

Much like olive leaf extract garlic may also be taken orally in the form of capsules. Garlic capsules vary widely in potency so be sure to follow the manufacturer’s recommended dosage.

There’s a clear link between a person’s diet and their susceptibility to fungal infections. Nobody’s diet is perfect, but these suggestions can go a long way in the prevention and treatment of onychomycosis:

When all else fails, come in for safe effective Laser toenail treatments for fungus