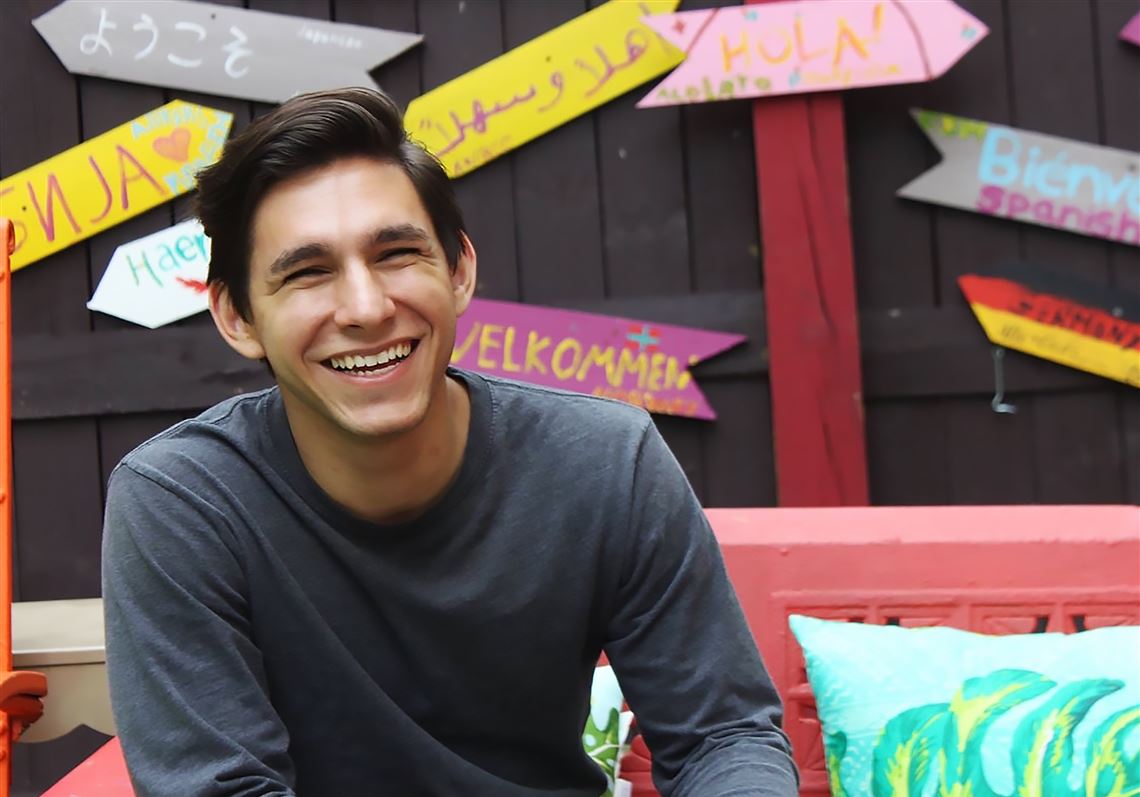 Bicyclist, 22, dies after being struck in Cranberry by accused drunk driver; donates organs

Last Wednesday night, Christina Teimouri and her husband decided to stop for dinner at the Mad Mex in Cranberry where her son, Aleksander Teimouri, was finishing his waiter training. They were seated in his section.

“It was super busy but he still gave me a quick hug and said, ‘Love you,’ and that’s the last words he ever said to me,” Dr. Teimouri said Saturday. “It’s miraculous that God put me there to have dinner with him.”

Mr. Teimouri wrapped up work around 11:30 p.m. and hopped on his 10-speed bike for the short ride home.

“I actually had this feeling, and I texted him, ‘Alek, do you want a ride home?’ ”his mother said. “Ten minutes later there was a knock on the front door that was louder than his normal knock and standing on the doorstep was a police officer. And I knew instantly. I said, ‘There was an accident, wasn’t there?’ I said, ‘Alek was hit on his bicycle wasn’t he?’ And she shook her head yes. My whole world ended at that moment.” 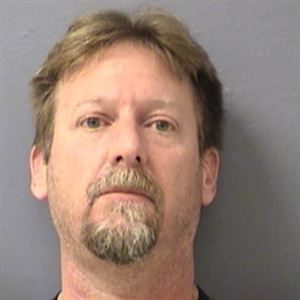 Authorities say a vehicle with a drunk driver behind the wheel struck Mr. Teimouri from behind on Rochester Road. Dr. Teimouri, a podiatrist, said the accident happened a block from home. “He died the second his head hit the pavement,” she said.

Mr. Teimouri, an organ donor, was removed from life support Saturday at 4:58 a.m. at UPMC Presbyterian, according to Dr. Teimouri. Over the course of the week, arrangements were made to donate his organs to numerous people, she said — a fitting last gift of life from a young man whose goal, she said, was always to help others.

“He didn’t like to waste a minute and did everything to the maximum,” Dr. Teimouri said.

Police charged David W. Lohr, 51, of Cranberry, with aggravated assault by vehicle while DUI, two DUI counts — one indicating that this was a first offense, the other reflecting that his blood alcohol content was at a high level — and reckless driving.

On Saturday, Butler County District Attorney Richard Goldinger said authorities were planning to add a charge of homicide by vehicle while DUI. Mr. Lohr made bail, which was set at $10,000 unsecured. He could not be reached for comment.

In an interview, Dr. Teimouri did not want to dwell on the accident beyond saying that her son had bike lights — but no helmet. He had been in a motorcycle accident several years earlier in which his helmet was crushed, but he came out mostly unhurt. Dr. Teimouri said her son probably didn’t think it was “cool” to wear a bike helmet and might not have thought much about the possible consequences of a bicycle accident compared with one on a motorcycle.

Dr. Teimouri said her son’s death stood out starkly because he adamantly opposed drunk-driving, so much so that he often served as a designated driver and would sometimes pick up his older sister, Aryelle, from Pittsburgh to drive her home so there was no chance she would catch a ride with a drunk friend.

After graduating from the University of Pittsburgh in April with a dual degree in chemistry and biology, Mr. Teimouri hoped to join the Air Force as a pararescue specialist, according to his mother. The elite unit’s motto: “That Others May Live.”

“The guy was looking to wear many hats, a jack of all trades, all circling back to helping others,” said his Air Force recruiter, Staff Sgt. Kyle Gimbel. “He was the first person in the three-plus years I’ve been doing this job to get 99s across the board, which is the top echelon. He was a very intelligent person. We moved him on to special testing to do other things, learn other languages. He aced those.”

He described Mr. Teimouri, who was on track to possibly start basic training in April, as “the perfect applicant I wish I had come through my door multiple times.”

Mr. Teimouri was socking away some money by working at Mad Mex while nursing his body back to health after surgery on his legs for what his mother said was exercise-induced compartment syndrome; he was riding his bike to maintain his fitness.

“e knew Alek rode his bike from time to time. His passion for staying fit and active was just a strong as his passion to help people,” his boss at Mad Mex, Nan Guy, the restaurant’s general manager, wrote in an email.

“Alek was not one to brag. Most conversations came in form of what he could learn and who he could help,” Ms. Guy wrote. “The first thing I noticed was his infectious smile! Alek had a way of making everyone smile at work. He was always positive, took his job seriously and worked hard from the moment he stepped through the doors. He was always striving to learn more. We all knew of his passion for wanting to help people and the passion he had for reaching his goal to join the Air Force to help people around the world.”

Dr. Teimouri described her son as a polymath with enormous potential and a huge heart. While In high school, Mr. Teimouri essentially adopted Anthony Hill, one of his friends on the wrestling team, during a difficult period in Mr. Hill’s life — the two are like “twinsies,” his mother said — and the family took in the young man, who ended up living with them for years.

Alek took enough Advanced Placement courses in high school to earn 18 months worth of college credits, Dr. Teimouri said. He also would commute for an hour to the South Hills, where he volunteered at Medical Rescue Team South Authority in Mt. Lebanon to learn the ropes as a paramedic.

Mr. Teimouri’s mother said her son would mooch hats, gloves, boots and socks from her to give away to homeless people outside his Oakland residence. He played piano. He loved to cook gourmet meals from a young age, whipping up goat curry, hosting dinner parties and overseeing holiday dinners. He did mixed martial arts and parkour. And, his mother said, he was an excellent student and always seeking academic challenges.

“When Alek was not lending a helping hand, he was pursuing one of his many interests, whether it was mixed martial arts, playing the piano, painting, or any of the other countless things he seemed to be effortlessly good at. If you ever had the pleasure of indulging in one of Alek’s culinary creations you probably thought he was a trained chef,” according to a gofundme page established by Mr. Teimouri’s sister in the hopes of raising money for a scholarship in his name.

“Behind Alek’s handsome face and the meticulously kept hair that put many of us to shame, was also a brilliant man,” the gofundme page said. “It seemed like any topic of conversation that would come up Alek was well versed in. He knew the most random tidbits of information. His intelligence went beyond books as he had street smarts, social awareness, and civic mindedness. All of this was paired with an unceasing desire to have fun, and amuse others. Alek was always making others laugh, the simplest things in life made him happy.”

Mr. Teimouri’s goal, his mother said, was to do a stint in the military and then become a plastic surgeon, like her brother-in-law, in order to help accident victims in need of reconstructive surgery.

In addition to his mother and sister, Mr. Teimouri is survived by his father, Arul Teimouri, of Washington, D.C., his step-father, Craig DeBiase, of Cranberry, and brothers Nicholas and Christian DeBiase.

Arrangements are being handled by Devlin Funeral Home in Cranberry. There is a viewing Wednesday from 2 to 4 and 6 to 8 p.m. A funeral Mass will be offered Thursday at St. Ferdinand Church in Cranberry at 10 a.m. 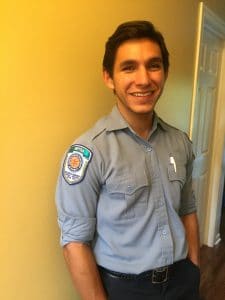 In Loving Memory of Alek Teimouri

Aryelle Teimouri is organizing this fundraiser.

It is with overwhelming grief, and the heaviest of hearts that we announce the death of our beloved Aleksander Teimouri. On the night December 26, Alek was riding his bicycle home from work when a drunk driver hit him, killing him instantly.

At only 22 years old, Alek’s life was taken from him too soon, and while it seems like the life he had was not long enough, there is comfort in knowing he did live each day to the fullest. Alek was always smiling-one of those full teeth showing kind of smiles. Just seeing it was enough to make you feel better. He had every reason to always be smiling. Alek was always moving, always doing, always giving.

Alek had a warm heart and outgoing personality that enabled him to make friends easily, and frequently. He was capable of interacting with anyone. He was so giving and selfless. He befriended the homeless in his community. One homeless man trusted him so much he wanted to give Alek the little money he had, and have him put it into a bank account on his behalf. Alek’s service to others extended beyond the homeless. During college, he was a medic, helping to save many lives. His mother would tell you how he was always helping her garden, cooking for the whole family, just doing the little things no one else wanted to do around the house.

When Alek was not lending a helping hand, he was pursuing one of his many interests whether it was mixed martial arts, playing the piano, painting, or any of the other countless things he seemed to be effortlessly good at.  If you ever had the pleasure of indulging in one of Alek’s culinary creations you probably thought he was a trained chef.

Behind Alek’s handsome face and the meticulously kept hair that put many of us to shame, was also a brilliant man. Alek studied Biology and Chemistry at the University of Pittsburgh. It seemed like any topic of conversation that would come up Alek was well versed in. He knew the most random tidbits of information. His intelligence went beyond books as he had street smarts, social awareness, and civic mindedness. All of this was paired with an unceasing desire to have fun, and amuse others. Alek was always making others laugh, the simplest things in life made him happy.

Alek recently applied to the Air Force, and his goal was to be para-rescue, also known as the “Guardian Angels”. He was ready and willing to risk his life in order to save others. While Alek’s passing is devastating and horrific, he is able to save many other lives as his organs are being donated to many individuals in need.

The intention of this fund is to use it in a way that will memorialize the life Alek lived and the person that he was. This fund will be used to establish a scholarship in Aleksander’s name, to help others to achieve their dreams.  Alek will be greatly missed by his ever loving family, numerous friends, and all those countless people whose lives he touched. Alek’s memory and the values he embodied will live on within each one of us.