Corns –  Corns and calluses are among the most commonly treated foot conditions. Corns and callouses meaning: Corns are the thickening of the skin on its outer layer around the toe’s tops, where calluses are similar condition but on the bottom of the feet. These conditions are caused from pressure and can be painful. Can be removed by your podiatrist with a scalpel, don’t try this at home! Be careful applying over the counter corn pads to

While they may be annoying and painful, corns and calluses usually aren’t harmful. In essence, both are areas of thickened skin which form as a protective response to chronic friction. The technical term for the hard, thickened skin which forms both calluses and corns is hyperkeratosis, or hyperkeratoses in plural. These terms are rarely used, and even among professionals these conditions are simply called corns and calluses.

In a callus, this protective response takes the form of a diffuse, broad-based patch of hardened skin. The technical term for a callus is tyloma. Calluses commonly form on the hands of manual workers such as farmers and construction workers. On the feet, calluses often form on the bottom of the heel and the ball of the foot. Anyone who walks or runs a lot can develop calluses on their feet.

Corns are much more localized, are generally thicker, and can be quite hard. They tend to take on a conical appearance, and are almost exclusively found on the feet. The technical term for corns is helomas or clavi. In some patients they take on a dry, waxy look, sometimes even appearing translucent. 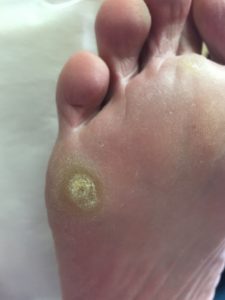 Calluses are commonly found on both the hands and feet. In reality, any area subjected to repetitive friction can form a callus. While corns can also technically form anywhere, in the overwhelming majority of cases they’re found on specific locations of the feet. Calluses are generally painless, while corns have the potential to become quite painful. The following are common locations:

Another relatively common location for corns is between the fifth toe (pinky) and the fourth toe. Instead of having a hard, conical appearance, corns located here are often softer and whitish. Not surprisingly, these are commonly known as “soft corns,” or beloma molle. “Hard corns,” or heloma durum, are usually found elsewhere on the foot 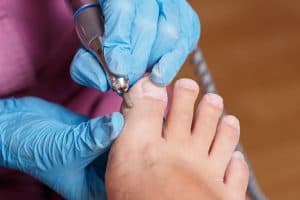 How do podiatrists remove corns?

In many cases, they don’t have to. Corns, and especially calluses, often go away on their own once the source of friction is removed. Often simply buying shoes which fit properly is all that’s needed. If this isn’t enough, podiatrists can apply padding around the corn to relieve excessive rubbing. If these two methods fail, then a podiatrist will carefully shave away the corn or callus. Nearly all podiatrists advise against using store bought acid-based corn remover products.

Home remedies for corns and callouses

Corns are an unnatural thickening and hardening of the skin over points of excessive rubbing and pressure. They form over time, and generally assume a cone-like shape. In many cases corns are harmless if unsightly, and don’t cause any problems or symptoms. If a corn is located on a weight-bearing area of the foot, however, they can be quite painful. Corns are among the most common conditions treated by podiatrists.

Corns aren’t good “do-it-yourself” opportunities. This is especially true of diabetics, as any form of trauma to the foot can have far-reaching negative consequences. Only a trained podiatrist should remove a corn, which often involves shaving them down.

Calluses are similar to corns in many ways, and are also one of the most common conditions seen in podiatrists’ offices. They are also a thickening and hardening response, and tend to form on the bottoms of the feet, particularly the ball of the foot and heel. Calluses are rarely painful, yet can require treatment if they’re overly thick or become cracked. As with corns, never try to shave down a callus yourself with any type of sharp instrument. Again, this holds especially true for diabetics. 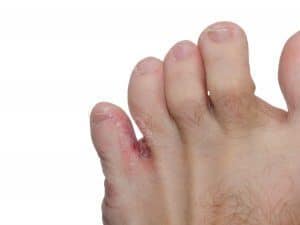