A hammertoe is a foot problem that is usually caused by genetics but irritated by wearing high heels, and so most commonly affects women. While a healthy young person may get blisters or calluses, the diabetic patient can form an ulcer and easily get infected. Diabetic wounds often lead to amputations, so these should be addressed with your local area Pittsburgh podiatrist.

What is a Hammertoe?

A hammertoe is popularly considered a bent stiff deformed toe that rubs in shoes. This buckling or contraction of the toe is often found in diabetics who have weakened muscles, then the hamertoe rubs in shoes, poor circulation in diabetic patients doesn’t allow the area to heal leading to worse problems and often infected wounds.

Hammertoes are usually caused by ill-fitting footwear, such as high heels, that eventually can cause a toe to stiffen into a claw-like position. Eventually, a hammertoe can cause your whole foot to suffer, including the ball of the foot. You can also develop corns, blisters, calluses and ulcerations. Although hammertoes usually affect women, men can develop them too.

Sometimes, patients who have diabetes may have nerve damage that eventually leads to hammertoes.  Regularly, if your have a bunion, usually you can have signs of a hammertoe, this is cause by bunion that pushes your big toe up under the second toe which then arches.

How are Hammertoes Diagnosed?

If your toe’s range of motion becomes limited, and can’t be fixed with conventional methods, there are several surgeries that can be performed. Your podiatrist will evaluate your toes and let you know which surgical treatment is best for your situation.

How are Hammertoes Treated?

Sometimes, hammertoes can be treated using home remedies, like using corn pads or wearing wider shoes that allow your toes extra room. However, if the damage becomes severe, hammertoes can be fixed with a simple, minimally invasive, 15-minute office procedure. The toe’s contracted tendons are reduced, the toe is straightened, and an artificial joint may be used to stabilize the toe.

If you’re forming hammertoes, call Beaver Valley Foot Clinic so that you can discuss your options with Dr. Christina. This common foot problem can be fixed quickly and you’ll be walking normally within no time. 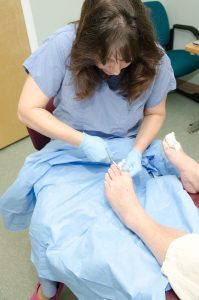 If conservative treatment is started early there’s a good chance that surgery can be avoided. The following self-care measures have proven helpful:

The following apply to mobile, “pre” hammer toes or other deformities. It’s unlikely that these methods will work if the deformity is fixed.

Prevention is easier than treatment

In cases of progressive joint deformities such as hammertoe lifestyle changes can stop the problem before it starts. The easiest (and most effective) of these is wearing proper footwear. Bear the following tips in mind: 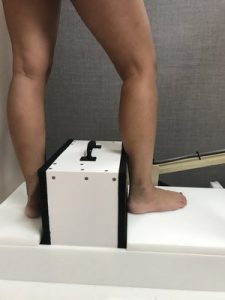 X-rays of the Sprained Ankle

It’s highly likely that your podiatrist can arrive at a correct diagnosis by examining your feet. An X-ray study can be ordered If there’s any doubt or if joint damage is suspected. MRIs and other advanced imaging techniques are seldom needed.

A change in footwear may be all that’s required if the toe still has some degree of flexibility. Roomier, more comfortable shoes with a wide toe box are frequently recommended, Orthotic inserts are often prescribed as well. When used together this relieves pressure, reduces friction, and improves the biomechanics of the foot and ankle.